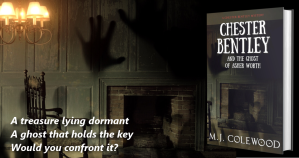 The e-book is available for just 7 days at the special price of 99c/79p, so grab your copy now at:

We would love to hear your feedback, positive or negative, so do leave a review. or get in touch with us directly when you’ve finished the book. Thank you and enjoy the mystery!

CHESTER BENTLEY AND THE GHOST OF ASHER WORTH

It is 1588 and the Spanish Armada has been sighted on the horizon. Drake, England’s buccaneering admiral, leads the English navy out to engage the approaching enemy, but his mission is compromised by a mysterious object.

Almost four hundred years later, schoolboy Chester Bentley finds himself in a terrifying confrontation with a ghost that haunts his house day and night. But what do the mysterious signs and numbers mean, and where do they ultimately lead?

Will Bentley be brave enough to confront the unrelenting ghost and decipher the clues that lead to one of the most remarkable treasure that England has been unaware of, until now?

LET THE GAME BE VENTURED!